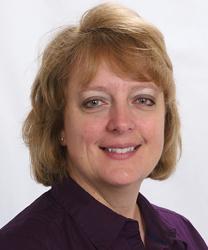 The Realtor showed Beth and Larry Austin quite a few houses when they moved to rural Pennsylvania last year, but one property in particular caught Beth’s eye. The place was overgrown with shrubbery that hadn’t been trimmed in 30 years and the property was covered in debris and poison ivy. “When we walked into the house, you could barely see anything for all of the stuff left behind; it was almost like a hoarder home,” says Beth. So naturally she turned to Larry and said, “This is the house I want.”

A year later everything inside the house has been replaced or redone. The only two original items left are a chandelier and a boiler. Beth and Larry didn’t just clean up; they used their own elbow grease to do such a great job that their home has been featured on DIY (Do It Yourself) Network, and the neighbors are eternally grateful. Beth sums it up this way: “I saw a lot of potential and said, ‘Okay, let’s get to work!’”

That statement could also summarize Beth’s enthusiastic approach with clients over her many years as a behavioral consultant. “I always knew that I wanted to do consulting,” she says. Yet, her current work as a behavioral safety consultant with QSE was preceded by a variety of career experiences.

Beth received her undergraduate degree in psychology from California’s San Diego State University and then moved to Alabama to attend Auburn University to complete her master’s in management and her doctorate in psychology. While there, she began work with the Manufacturing Extension Partnership (MEP), focusing heavily on applying Lean Manufacturing.

“MEP is a great organization with a mission to disseminate technology to small- and medium-sized businesses that don’t have the deep pockets of larger corporations,” she explains. In fact, her positive experience with the MEP served as an inspiration for her involvement in the new behavior-based product: BBS Essentials®. With BBS Essentials, companies can reduce the time and manpower required to implement a behavioral safety process. “I think that it will be helpful for QSE to start to disseminate their technology to small- and medium-sized companies without those companies getting a watered-down, cookie-cutter process with no additional support afterwards. I guess another goal of mine would be to find a geographical region that has an industrial park of non-competing companies where we could hold a design workshop and they could attend on a cost-share basis,” Beth says of plans for the new Values Based Safety® product.

During her stay at Auburn University, Beth worked for five years in mental health with a community residence program.  While in graduate school, a colleague told her about the experimental psych program. “I asked, ‘What’s that?’ Because of my mental health background, I thought it would be a good fit, and voila, I ended up being a behavior analyst,” she says. Soon Beth was attending a few engineering classes and several behavioral safety classes and seminars.

Later Beth enjoyed an assistantship with the Alabama Technology Network (ATN) under the umbrella of MEP. After she graduated, ATN wanted to retain her services as a contractor. “I said okay, I’ll just open a company, and I never looked back,” she says. Forming that company—Performance Improvement Consulting, LLC—signaled a permanent career change as Beth switched gears from working with individuals with developmental disabilities to a full-time focus on Lean implementations with the defense and aerospace industry.

Her career path soon took another unexpected turn. Even though her primary clients were making good process improvements, they were experiencing some serious injuries.  They revealed that they were considering looking into a technology called behavioral safety. “I said, ‘Wait a minute; I think I can help you.’ I met with Terry McSween [QSE’s president], and that’s how I started on the behavioral safety journey,” she comments.

Beth’s consulting journeys have taken her throughout the United States and around the world to locations in Greece, Norway, South Korea, China, Kuwait, and Moscow. A native of Northern California, she has two stepdaughters and four grandbabies that live in Southern California. However, don’t envision a grandmotherly image. When Beth isn’t flying around the country and the world, she’s riding her own Harley Davidson. She and Larry, a safety manager, recently completed a 17-day ride down the famous Route 66 and attended the annual motorcycle-mecca event—the Sturgis Rally—in 2009. She and Larry also enjoy sharing their renovated home with two pets: Lucy, a boxer/Lab mix and Abby, a golden retriever mix.

Obviously, Beth is a person who likes a challenge. She states that the most common hurdle she faces when working with a client is the lack of upfront leadership communication regarding a new behavior-based safety initiative. “The employees often say that leadership doesn’t communicate with them, so I try to increase communication throughout the VBS design. It helps to identify that from the beginning and to come up with solutions instead of just pointing out the problem. I start out by asking the team, ‘How are you going to keep everyone informed? How are you going to communicate?’” Beth comments.

Communicating with others is one of the perks of the job, according to Beth. “I think that what I like most about consulting is the variety of industries, people, and places,” she says. An expert in behavioral safety, a past president of the Alabama Association for Behavior Analysis, a published author in the Journal of Applied Behavior Analysis, coupled with years of successful client results—it all adds up to a very impressive (and maybe even intimidating) resume. However, Beth doesn’t really see it that way. “I have several hobbies, like to be outdoors, ride motorcycles and I tend to find a connection with people at the various companies where I work,” she says. “When I work with people on the shop floor, I’m just one of the gang.”