Canadian Utility Generates a Safer Workplace with Behavior Based Safety

A large, sophisticated safety department and a strong concern for operational safety at one of Canada’s major utilities were not enough to avert several fatalities or avoid multiple major injuries—one resulting in a double amputation. “They were under serious regulatory pressure to bring their incident rate down, but they had really done everything they could do, except for the behavioral approach,” says Grainne Matthews, Quality Safety Edge (QSE) behavioral safety consultant.

One of the largest electricity and natural gas utilities in Canada, this operation serves over half a million customers and exports electricity to 35 electric utilities and marketers throughout Canada and parts of the United States. The facilities include 55 offices and stations spread over almost 250,000 square miles. With meter readers, a call center, transmission linemen, coal-fired plants, hydro generation throughout Manitoba, and a huge substation in Winnipeg, this company faced a daunting, but necessary challenge—the implementation of a safety process that focused on identifying, observing, and giving feedback on the behaviors that would make the workplace safer.

QSE evaluated the safety management systems and safety culture for the organization and identified the influences on employee safety practices and management support of those practices. Since the organization was so large, and because the company wanted to roll out the process to multiple business units over a number of years, Matthews and Terry McSween, president of QSE, suggested using a combination of implementation models: internal consultant and train the trainer. Internal consultants learn about the safety process, observe the QSE professionals during an onsite implementation, and then (with QSE’s guidance) complete an implementation themselves. With train the trainer, a number of employees are subsequently selected by the consultants to learn the technology and then train the entire workforce in the safety observation and feedback process.

Following a successful pilot implementation, McSween and Matthews worked with the company to develop two internal consultants and four trainers who would roll out QSE’s Values-Based Safety® process to the entire corporation including 14 hydroelectric generating stations, three converter stations, two thermal generating stations, four diesel generating stations, as well as mechanical and apparatus maintenance, meter readers, fleet, underground and overhead construction, and all office staff. “We began by working with an employee design team to create a model Values-Based Safety® process to be customized by employee steering committees in the different units. Defining features of the Values-Based Safety® process are that the process is designed and led by employees, that as many employees as possible actively participate in the process, and that the role of management is clearly defined,” McSween explains.

The internal consultants led each design team through an analysis of the incidents that had occurred in their unit over the past few years. This information, coupled with the data from interviews, provided the information for generating a tailor-made operational safety process with targeted behavioral checklists for each business unit. Each design team customized the model process for their unit. The internal consultants also conducted leadership workshops to show leaders how they could support these employee-led steering committees.

“They were able to bring the incident rate down dramatically within a short period of time,” says Matthews. “It was very much correlated with the implementation of the process in any given unit.”

The employees readily embraced the behavior-based process and the management involvement and support added to its success. Matthews adds: “The safety professionals there felt that the process really added to their repertoire and understanding of, once you have all of the rules and regulations, policies and procedures in place, how to get people to follow them.”

The following graphs represent a sample of results from different types of functional groups at this Canadian utility. The frequency rate is calculated as number of incidents per 200,000 hours worked. 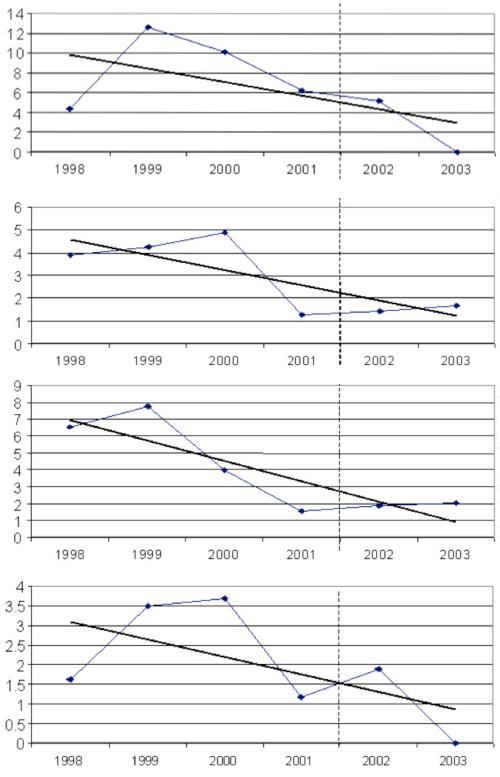